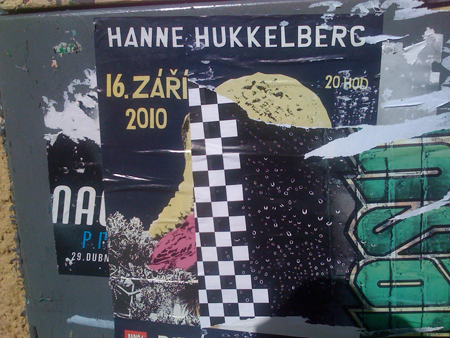 Last Thursday I went to see the Norwegian singer-songwriter Hanne Hukkelberg play. I’d never heard of her before Wednesday, but she was recommended by someone, so I took a listen to her Bjorkian dirging on youtube and decided it was worth a go. She sounds a little bit like – to paraphrase my favorite throwaway line from Henry Miller – ‘a thousand heads of cauliflower wailing away in the dark’, but in a cool way. Her alliterative Nordic name reminded me momentarily of this fascinatingly lame concert poster I once spotted in Berlin for somebody called Konrad Kuechenmeister… 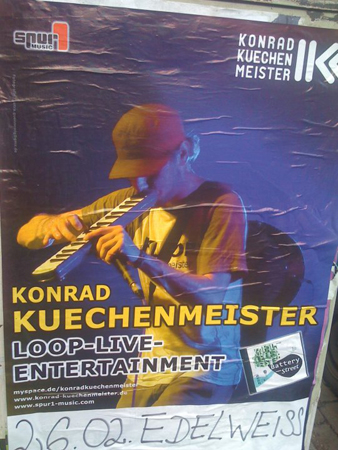 … but that’s not her fault.

So, anyway, we filed in at about 7:30 to see her play. Something I like about this venue, Akropolis, nearby where I live: the set times are always really, really early, so you’re often back out on the street by 10. I like this (a) because I’m old, and (b) because if the show is bad, you can still go to dinner or a bar and salvage the evening. In this case, the Norwegian Hukkelberg girl wasn’t bad… but it suffered from the overriding wimpiness– both sonic and dramatic– that mars a lot of the electronically-augmented-singer-songwriter genre. If you listen to her clips, her (impressive) voice is just a part of an engrossing landscape of whirs, clicks, beats and orchestral noises… but onstage, it’s just a woman singing along with some sequencers. When I saw my friend who recommended the gig, she hissed ‘Where is the band?‘ with great contempt. The worst part of it is that Hukkelberg would make a show of playing some instrument in every song, but it was always the most ineffectual instrument most buried in the mix. I tried to suspend judgement for the first twenty minutes, but later felt myself wearying a bit as I watched her singing away while rhythmically manipulating something that I could swear was a plain old mortar and pestle.

When I mentioned the ‘Where is the band?’ sentiment to my buddy I’d come with, he speculated, ‘Maybe the only way to make money playing in Prague is to leave your band behind.’ For the remainder of the set, I was completely distracted by imagining a custom– both financially-driven, yet also ritualistic– where the backing band is left to wait in Bad Schandau (this being German border town you go through on the train before entering the Czech Republic) while their leader travels on alone eastwards to make korunnas and roubles. Dressed identically in black suits and thin ties– like the Pretenders sans Chrissie Hynde– they idle around, kicking bottlecaps in the dusty streets and drinking Becks. One can even imagine a historical accident where Bad Schandau becomes renown for its local music thanks to all the skilled backing bands that have left there: the News mingling with the Mechanics jamming with the Waves, all while their singers are off somewhere else… sort of like the famed Army all-star band during World War Two that could boast some of the best jazz players in the country at that time.

Next, on Saturday, we went to a very different kind of musical venue– a ‘wine tasting festival’ in a small town west of Prague that combined elements of Dork Season with your average redneck American country fair. There were lots of haircuts like this: 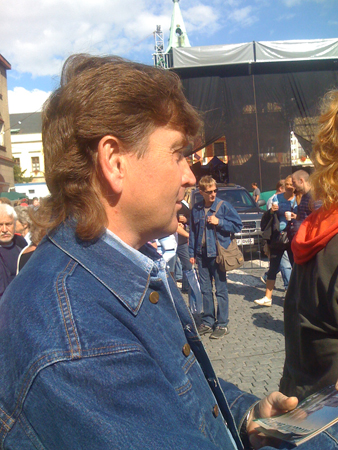 The headlining act for this festival was none other than Michal David, legendary king of Czech 80s cheese. In the pantheon of Czech 80s pop culture, David is Corey Hart, Bruce Springsteen and Phil Collins all rolled into one hideous cultural zeitgeist/abortion. Here he is in his prime (1983), performing his breakout hit ‘Nonstop’:

This is bad enough without any context, but I feel obligated to add that ‘Nonstop’ is the Czech term for a store that’s open 24 hours. And that David released an autobiography two years ago titled ‘Život Nonstop’ (Nonstop Life). And that he’s become an apparatchik for various unsavory politicians in recent years.

… and, of course, in the classic Disco Přiběh, discussed here.

Anyway, in the end, I guess neither performance was all that memorable. If I had to pick one, though, I would say I probably enjoyed Michal David slightly more, which just goes to show once again the tyranny of low expectations and unfair advantage that irony and schmaltz enjoy over things that are trying to be serious and good.