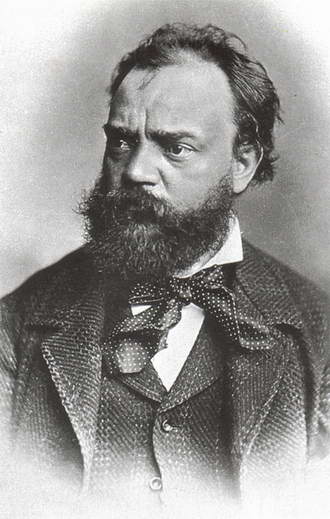 There are only two things in my future that I look forward to with utter certainty. One is being able to communicate with my son; the other is the point in time when classical music suddenly starts to appeal to me. Naturally, there are plenty of things that I sort of happily anticipate in a general sense, but these are the only two concrete, forthcoming things that seem 100% destined to take place. And, yet, haven’t so far.

Dvořák was no populist of naîf, as Michael Beckerman, his most perceptive American chronicler, has shown. When he set aside “classical” writing, he was really announcing his intention to rival Wagner. It’s as if he had imagined the first line of his obituary being written– the lowborn composer who gave the Germanic symphony a rustic air– and tried for a different outcome. In the end, it was not to be Dvořák reached the “broad masses” not through operas, gorgeous as some of them are, but through his symphonies, concertos, and quartets. When the rapper Ludacris sampled Dvořák, he went for the “New World” Symphony, not ‘The Devil and Kate”. Dvorak’s struggles with classical form led to his finest music: the “New World” is a narrative of cinematic vividness, in which sharply etched themes are swept up in furious episdes of development and transformation.

Taken purely as an exercise in dramaturgy, this sounds awesome. If it was simply a story, and not something that had to be listened to, I think I would appreciate it to no end. Which underscores the uncomfortable fact that classical music seems to embody so many qualities of things I enjoy (not least of all narrative and music) that it’s a mystery to me why I don’t enjoy it. The moment I pull up these New World symphonies in the iTunes store and give them a listen, they don’t sound furiously developmental and transformative to me at all. The first one sounds irritatingly anesthetizing to me, and (strangely) makes me think of a particular nervous friend of my mother. The next sounds cornily bombastic– I immediately see a conductor in my mind’s eye and he’s doing that thing that conductors do where they suddenly pretend to throw a gassy, violent tantrum to inspire the orchestra, all flapping tailcoats and flailing batons. The third is all nervous mincing and prancing. Perhaps its partly just that society has heaped so many superficial associations on the back of classical music (Eurocentric perfectibility, Mercedes ads, Baby Mozart, etc) that I can’t help but liken each composition to an artificial mannerism. But in any case, something isn’t working.

There have been moments of hope. Back in the day, my friend Joe Schactman gave me a tape of Bach’s partidas and sonatas for violin that I started looking forward to hearing as much as all the dub music and stuff I was into at that time. Alas, part of the appeal, I eventually realized, lay in the lo-fi format: on cassette, the violin had this raw, groaning sound that gave it almost a hint of drone. As soon as I re-obtained this album on CD, the remastering made it sound all icy and perfect and prissy again. I guess the degree to which I’m focussing on sonic qualities and not grasping the music in terms of compositions betrays the extent to which I don’t fully get it. At the end of the day, after all, I’m inclined to say ‘It all sounds the same to me!’, which is always a surefire indication that you don’t know what the hell you’re talking about. Every genre sounds ‘all the same’ when you don’t understand it.

Despite all my present resistance, there’s no doubt in my mind that something will eventually click into place and I’ll become an enthusiast. How many hppy hours of digging and delving will then follow this moment. I wonder: will it happen gradually, or will there be a Road to Damascus moment? Will it crowd out less ‘serious’ musical tastes, or will I still listen to things like Morrissey’s I Am The Quarry that possess no culturally or personally redeeming features?  And, most interestingly, how will I remember the way I hear classical music now? I already have a few albums (Al Green’s Call Me being the example that jumps to mind) that I didn’t like for years and am now hugely into and can actually reconstruct in my mind’s ear (if you will) how it sounded to me when I didn’t like it. Weird if I am able to experience that sensation again, but applied to an entire genre.