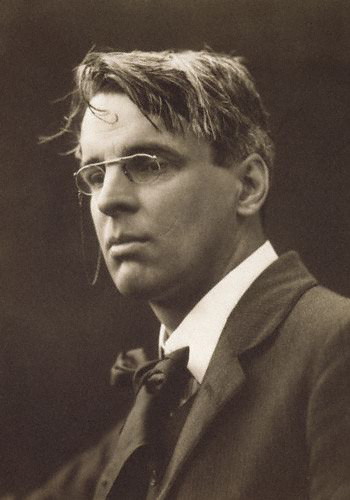 I had iTunes on shuffle today and Time to Pretend by MGMT came up. The song’s been out for like a year and a half, but somehow I had never really paid attention to the lyrics before. Oh, I’d listened through the part about ‘I’ll move to Paris, shoot some heroin, and fuck with the stars’, but tended to tune out thereafter and had always just assumed that the song was about youthful hedonism and that’s all there was to it. This time, for whatever reason, I paid attention through to the end and was struck by how much in common the lyrics have with one of W.B. Yeats’ early poems, ‘The Stolen Child‘ (one of the few Yeats’ pieces I still remember vividly from a seminar I took in college). Consider…

In Yeats poem, a bunch of faeries plan to spirit off a human child to a magical land. The magical land is all good times, carousing around and staying up all night (‘To and fro we leap / And chase the frothy bubbles, / While the world is full of troubles / And anxious in its sleep’). Its allure is in its non-reality and weightlessness (consider the strange and beautiful line ‘We seek for slumbering trout / and whispering in their ears / Give them unquiet dreams’), and in the extent to which this contrasts with the mundanity and sorrow of the real world:

Come away, O human child!
To the waters and the wild
With a faery, hand in hand.
For the world’s more full of weeping than you can understand.

But then, the final stanza produces this switcheroo where we’re made to feel the longing that the stolen child will feel for the tangible, commonplace details of the real world, petty and squalid as they may be:

He’ll hear no more the lowing
Of the calves on the warm hillside
Or the kettle on the hob
Sing peace into his breast,
Or see the brown mice bob
Round and round the oatmeal chest

The sheer tangibility and realness of the lowing cows, singing kettle and vermin-infested oatmeal chest becomes the stuff of nostalgia. Time To Pretend manages a similar trick: the first half presents stardom as all models, cocaine and elegant cars, an escape from mundanity. ‘What else can we do?’ the singer asks, ‘Get jobs in offices and wake up for the morning commute?’. The first verse ends with him pledging to ‘forget about our mothers and our friends’. But then, in the second verse, we get the equivalent of brown mice bobbing in the oatmeal chest:

Suddenly worms, family members and even boredom are things to be longed for. Of course, Time To Pretend ends with a sort of resolution and renewed vow to party up to the end and eventually ‘choke on our own vomit’… but I like to think that they were really channeling Yeats and just threw this in at the end to make it an acceptable pop song. In any case, I think there’s a lot of correspondence between the two, given that one is a youth anthem and the other is all pre-Raphaelite and shit.

3 thoughts on “Faeted To Pretend”