As a parent, I feel it’s very important that my child understand and appreciate fully man’s dominion over the animal kingdom. So, over the weekend, I built this educational three-dimensional installation to help explain the concept to him: 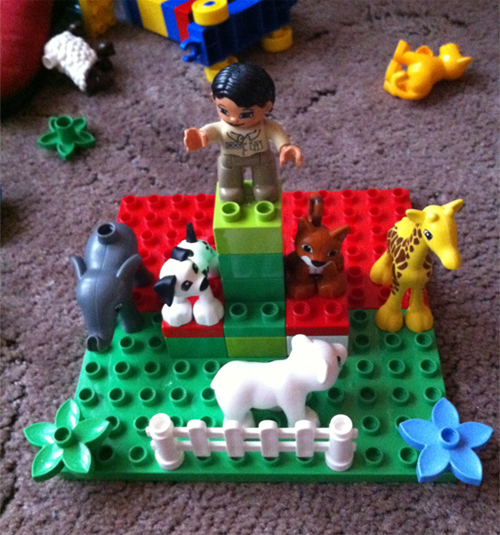 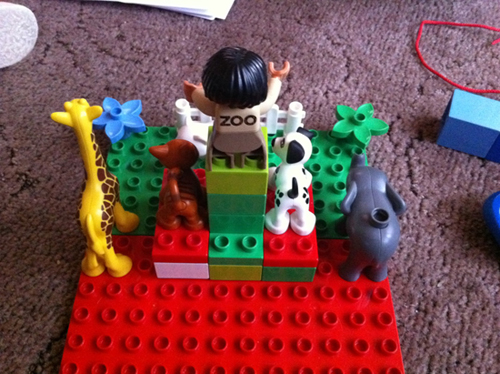 Here’s how it works:

1. Wild animals— represented here as polar bear, elephant, and giraffe– are part of the scene, but demoted to the lowest plain, fenced in by man’s ingenuity and inanely distracted by a few plastic flowers placed in their midst.

2. Domestic animals— cat and dog– are one step closer to man’s likeness, and therefore get boosted up into ‘second place’, as it were, on the pedestal beside him.

3. At the top, exalted, and ruling over “every creeping thing that creepeth upon the earth”, is man. Just to make it clear what his relationship is to the animals, he’s also a zoo keeper (as shown in rear view). If possible, I would have placed him in a leather overcoat, just to make the pecking order totally overt, but it seems that Lego doesn’t produce this piece.

In terms of my architectural influences, I would say I’m pretty close to Frank Lloyd Wright in terms of drawing inspiration from non-traditional forms such as pre-Columbian Mayan temples and Japanese concepts of space.

2 thoughts on “This Week In Lego”