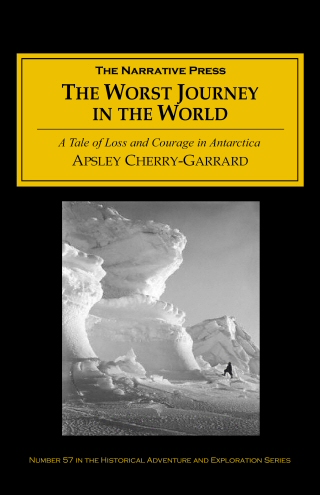 Good times abound: spring is right around the corner (last night, I heard a bird chirping in the evening twilight for the first time this year), baseball season is a scant three weeks away… and the Idlewords guy is finally posting again. Maciej Cegłowski is the best writer around, but for months his site was lying dormant with some inscrutably geeky (to me, anyway) post about ‘Using WordPress to generate flat files.’ Now he’s back with a resplendent discussion of scurvy.

The article was apparently sparked by his re-reading of a book called ‘The Worst Journey in the World‘ by Apsley Cherry-Garrard, an account of Robert Falcon Scott’s ill-fated expedition to the South Pole that I’ve had my eyes on for a while. As I mentioned in an early blog post, I went through a phase a few years ago where I read accounts of adventurous expeditions for a few months to the exclusion of everything else. There’s something addictive about the asymmetry of lying in the comfort of your living room while other people have to go freeze to death on antarctic voyages, or have their still-beating hearts torn out by Aztec priests, or get swallowed whole by whales and emerge bleached and peevish. I once thumbed through a few pages of ‘The Worst Journey in the World’ at a relative’s house and have been meaning to get back to it since. Among other promising indicators: while there may be better book titles than ‘The Worst Journey in the World’, and there might be better author names than Apsley Cherry-Garrard, I feel fairly confident stating that no book could possibly have a cooler title/author combo than this one.

Scurvy’s frustrating comeback is covered in entertaining detail by Cegłowski. The disease has basically been eradicated by the middle of the 18th century (when the British Navy began supplying sailors with a shot of lime juice in their daily grog), but then bounces back in time to harass Scott’s expedition in 1911 thanks to a variety of factors of which good old human ignorance is the most readily identifiable.

I know of a case of scurvy that happened as late as the early 1960s, and I only know about it because my ex-housemate told me about it, and he only knew about it because the victim was his father. The father was a classic hyper-driven, bachelor lawyer-type guy whose life apparently became so oriented around work that he didn’t get around to consuming the bare minimum of vitamin C necessary to thwart off scurvy. In my roommate’s telling, he then became a kind of cause celebre in the local medical community, as doctors crowded around to get a look at an actual case of scurvy, a disease they had believed to be long extinct.

I think this would make for a great reality show premise: which contestant can contract scurvy first? It’s apparently simple enough to pull off, once you put your mind to it.

2 thoughts on “Scurv Your Enthusiasm”