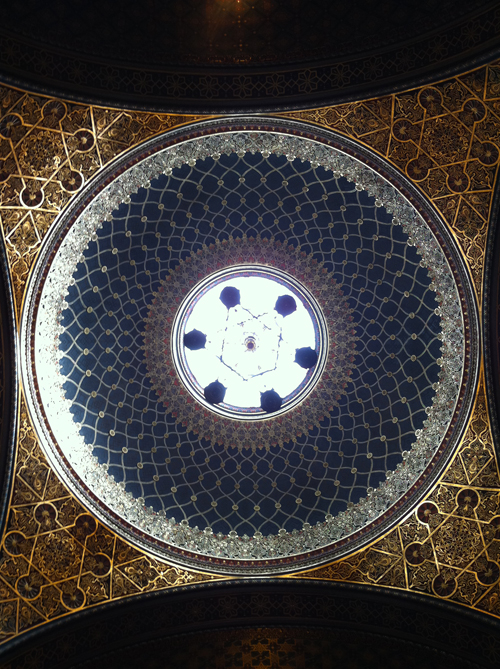 I have a new design project that seems interesting. It’s a competition between five designers to create a new identity for the Prague Jewish Museum. What makes this especially compelling (beyond the fact that it doesn’t involve selling sneakers, or producing Flash banner ads with involve breakdancing clowns, or adding a Miffles stream-of-consciousness feature) is that the fact that the Prague Jewish Museum isn’t just a museum per se but rather a group of six interrelated historical sites in the Old Town. So, it’s like designing (or trying to design, anyway) an identity for a considerable chunk of the Josefov district.

This is what differentiates the Prague Jewish Museum from all others, I would say: Berlin might have a cool Daniel Libeskind-authored concept, another city might have a great exhibits, or artefacts (or actual Jewish people living in the city, for that matter, something Prague essentially does not have)… but Prague is the only city I know of that can bring an actual historically-preserved Jewish Quarter to the table. Famously, the area was left intact by the Nazis during WW2 following Hitler’s chilling decree that it should remain standing as a ‘monument to an extinguished race’. Interestingly, though, when I met the museum directors to discuss the logo project, they were eager to dispel the general misconception that this marked the beginning of the attempts to preserve the district (which would make Hitler the de facto founder of the museum, in a weird way… so you can see why they were eager to correct this notion). Actually, the preservation effort had already begun in the beginning of the 20th century, when urban renewal projects in the New Town started to prompt concern about the potential destruction of synagogues and artifacts contained within.

Anyway, my strategy this time is to avoid all attempts at ‘creative thinking’ and go straight for a trusty cliché. So, I’m thinking: a star of David… but instead of the star having points, each point will be a well-recognized Prague tourist site, such as the Charles Bridge or Prague Castle. It can’t miss!

One fun thing about this project is that I’ve been furnished with a pass to all six sites and a special form granting me permission to take photos (as to gather fuel for my awesome and mysterious ‘creative process’, if you will). On the downside, this entails setting foot into the utter tourist INSANITY that is happening at all times but especially during the springtime in the Old Town Square. It’s indescribable: a constant rate of chaos and oblivious people with backpacks bumping into each other in narrow spaces that you COMPLETELY forget about the existence of if you’ve lived in Prague for a while. Still, it’s well worth it for the chance to see these sites again, and also for the opportunity to ham it up and self-importantly brandish my photo permission at the smallest of pretexts.

I used my ‘press pass’ to take the photo at the top of this post, which is the ceiling of the Spanish Synagogue. I would love to post a bunch more photos, but worry that I will get in trouble for abusing my photo privileges. (It seems to me that the ceiling is known and photographed enough that it shouldn’t be a problem to post this one lone shot– if you are a director for the museum and reading this and thinking about getting angry at me, please consider this logic.) The artifacts on display inside this building included lots of lovely old book covers (my favorite!) and also a few sample bills of the special worthless ‘funny money’ that was issued to Jews inside the ghetto (back when Josefov was a walled-in apartheid zone). The text on the bills was, of course, written in German (naturally… but still strange to see) and really did look like Monopoly money.

However, my vaunted ‘press pass’ did not allow me the exalted, unmolested status I’d hoped for. The photo at the top of this post was taken milliseconds prior to me being subjected to a lengthy and melodramatic plea from the security guard not to take any more photos. This despite the fact that I’d already shown her my pass and she’d already okayed it. Apparently, her thought process was that she first accepted my right to take photos but then freaked out when she realized that the Synagogue was full of people (as it always is, duh) who were likely to take my lead and start trying to take photos themselves. Therefore, her appeal to me was delivered not on the grounds of museum policy, but rather as a sort of desperate personal favor: Can’t you come back on Saturday instead when I’m not here? You’re making my life harder! This, I must opine, is a classic example of the old-school Communist generation mindset at work: the beleaguered functionary’s total inability to consider both sides of an equation and make everyone’s interests meet within a given dynamic. Go do your job!, I considered hissing at her, but in actuality wilted under the barrage of her long, insistent pleas (delivered exclusively in Czech, what’s more– maybe that’s part of what wore me down) and just made little sketches of whatever else interested me.

1 thought on “Inside the Spanish Synagogue”