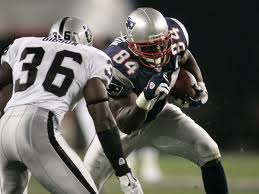 Although I have never really gotten into a lot of the “traditional male” crap like cars and guns, I have been a committed sports fan for as long as I can remember.  And although I abandoned my home city of Boston a decade and a half ago, and in most respects hold very little (if any) allegiance to its provincial, bean-eating ways, I have continued to support its professional sports teams even as I’ve walked in the shadow of the valley of the New York Yankees and Los Angeles Lakers in my more recent homes of NYC and LA.  So I tend to view the beginning of the various sports’ seasons with excitement — it’s my opportunity to plunge, once again, into an oversimplified world of Right and Wrong, where many of the complexities and moral ambiguities of the real world melt away once my chosen gladiators step inside the lines of their field/court, and where acts of individual and team heroism and glory can be reasonably expected on a somewhat regular basis.  There’s a wonderful Seamus Heaney poem called “Markings” that describes, far more articulately, what I’m getting at: how the protagonist children marked out the field with four jackets, picked the teams, “and crossed the line the called names drew between us.”

Today marks the beginning of the National Football League season, so I sat down with my morning coffee and “aimed my browser” straight for some of the standard sports sites like www.espn.com to revel in the collective excitement over the start of the season.  But I ran into a disturbing problem, one that has been haunting me more and more of late: all anybody wants to write or talk about is their “fantasy leagues” — that is, an entirely distinct “game” in which people “draft” their own professional players from a mix of different teams, and then compete against other such fake “teams” based on the individual statistics compiled by the players they’ve drafted.  The appeal, I suppose, is that the person gets to be his own (and lets not even bother to pretend that more than 1% of these people are women) “general manager” by “drafting” these players, and then trading them with his “fellow general managers.”  But the whole thing has always really bummed me out.  Partly I think it’s the way that, by reducing the games to the individual statistics of individual players, it ignores the “whole is greater than the sum of its parts” aspect that often means the difference between victory and defeat, and which makes sports so particularly interesting to me.  But beyond that, it seems like the craziest folly to take these overblown spectacles that are themselves utterly divorced from the real world and its problems, and then derive from that something called “fantasy.”  The games themselves are already fantasy!  Isn’t it enough to be a fan of your team, and watch people who have actually made careers of this (whether as players, coaches, or team-builders) try to overcome your collective rivals?  Is it really necessary to create an extra layer of fakeness out of that in order to feel “in control”?