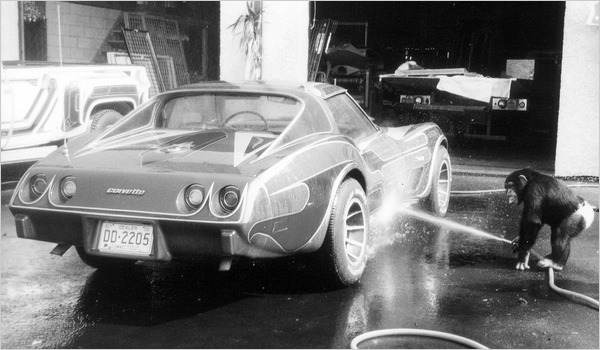 Thanks to a recent link from I Blame The Patriarchy, there has been a steady stream of incoming hits to something I wrote about Bubbles the Monkey last summer shortly after Michael Jackson passed away. Revisiting this post has refreshed my sense of what a disappointment the relations between man and his close neighbor have been over the years. Somehow, despite being immediate neighbors in the DNA chain, we remain odd bedfellows at best in the social sense. A Malcolm Gladwell article I recently read about dog trainers explained that, although dogs are much further removed from us on a genetic level, they have an unaccountable curiosity about our behavior and therefore are able to take subtle cues from us in terms of the body language we demonstrate. Chimpanzees, meanwhile, despite all the apparent commonality, really have little more sensitivity to us than seagulls or mollusks do. Unlike dogs, they can’t really be trained to exempt us from their inborn aggressive impulses. And so things tend to add badly, both for the apes that are conscripted to live among us, and for the ill-advised human dummies who acquire them.

Consider the poignant case of Travis the Chimp, whose story was included in the annual New York Times Magazine obituary issue and passed along to me by my father. A retired TV chimp, Travis could apparently do just about everything a human could do. He could drive a car, draw pictures, and surf the web. But then one day – as is rivetingly recounted in the Times story – he freaked out when a house guest arrived, attacked, and tore her face off. When the police arrived, he loped over to one squad car, knocked the side view mirror off and then managed to tear the door open. The officer, pinioned between the wheel and monitor, barely had time to draw his weapon and shoot the monkey to death.

One of the more practical and sobering revelations that Michael Jackson’s last days could have provided us with as a society is a deeper reckoning with the sad orphaned state of Bubbles and the terrible demise of Travis. Perhaps at some point in the future, opulent loons and wingnuts might learn from Jackson’s story and stick to sleeping in crytogenic anti-aging chambers and advancing up the ranks of Scientologists, rather than adopting apes in a misguided attempting to bridge the apparently insurmountable distance between man and chimp.