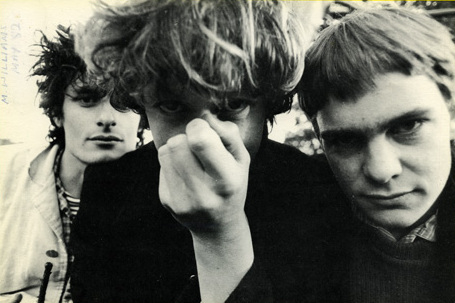 (This time on a Sunday, for no particular reason.)

When I was much younger, I used to assume that the existence of any album I liked was essentially predetermined, as though god had decided ‘Let there be Rocket To Russia’. As I got older, I began to realize that a lot of these records were subject to the vagaries of adult lives and adult flakiness. Maybe a record like Fleetwood Mac’s Rumors was bound to happen. But what about all the little fly-by-night bands that dot the history of music… what if the weather is bad and the drummer decides not to bother making the drive to the recording session? What if the 19 year-old guitarist gets in a fight with the 20 year-old bassist?

Consider this fraught back story: band forms in 1978; bassist quits shortly thereafter; band breaks up later in 1979; band reforms in 1980 with a new bassist. In 1981, band decides to do an album only to discover that the small number of sound engineers in their native New Zealand all uniformly dislike their sound. Band records two EPs and a single on a friend’s four track before breaking up again in 1982. In either ’82 or ’83, the band’s guitarist and drummer — two brothers — get together to produce a few home recordings which they release under the name The Great Unwashed, a joke on their original name The Clean. In 1984, the brothers put together a band to back the new material, which includes the original bassist, now playing guitar. This lineup releases a new EP of material called Singles before breaking up again later that year.

Somewhat surprising, then, that with all this breaking-up and getting-back-together and brothers moving back and forth between Christchurch, Auckland and Dunedin, the band’s fleeting side project produced a song with the kind of perfect craftsmanship of ‘Born In The Wrong Time’ (written and sung by the original bassist, Peter Gutteridge). Not even two and a half minutes long, it nevertheless manages to create a really striking and sobering mood around an imaginative choice of subject matter:

Born In The Wrong Time — The Great Unwashed

Personal story regarding The Clean: In 1989, the ever-ambitious Krafty arranged for a then-unknown Galaxie 500 to play at our high school (footage here). Later that year, the Clean reformed to do a reunion tour. This seemed like the only chance we’d ever get to see our heroes, but the Clean were playing at a bar in Boston that was impossible to get into with a fake ID (thank you, Michael Dukakis). Luckily, the booking agent for the Clean show was the same guy who had booked the Galaxie show and ‘owed a favor’ to Krafty. So, we called him up and were told, “Sure, just show up to the sound check and we’ll work it out.” Well, when we came to show, the booking agent wound up telling the doormen that we were the road crew for the Clean. This still cracks me up: the idea that three strapping men from New Zealand in their late 20s would hire two scrawny teenagers — clearly from the Boston area —  to carry their gear around on tour… but, hey, whatever works.

By the way, while doing ‘research’ for this post, I wound up inadvertently googling people who feel that they’ve been born in the wrong time. Check out assorted metaphysical whimpering here, here and here. My favorite is the helpful respondent who suggest going to Renaissance Fairs in the last link as a therapeutic solution.

2 thoughts on “Friday song: Born In The Wrong Time”