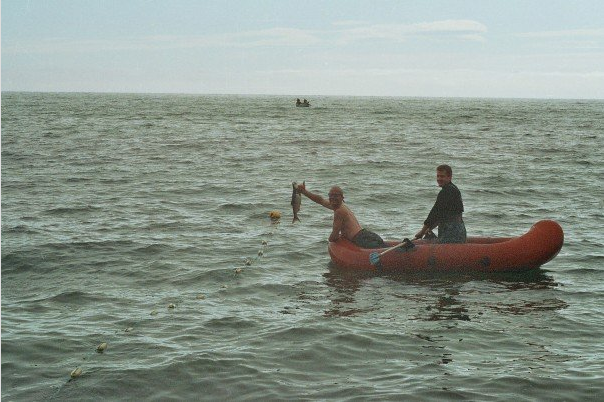 Back in Magadan, Andrej nears the end of his visit and prepares to head back to Moscow shortly]

The Onyx Bar is very small. There are two seats at the bar and three tables in a small room with a TV hanging from the ceiling. There, I know, I can always find the two Maxes; Handsome Max and Big Max. They are both big, but Big Max is extra large. And Handsome Max is handsome, if you ignore all the scars. The Onyx Bar is on the edge of Gorky Park, where I recently mowed down a band of aggressive little malcheks (punk kids.) It was quite a rumble, two against twelve. Good thing I was armed.

So one cold night (which is day, here), I’m sitting in Gorky Park, with eyes in the back of my head, enjoying a refreshing two liter bottle of Far East malt liquor. The girls are wearing mini skirts and stillettos despite the weather. But they fear me; on account of my beat up Soviet-era bomber jacket, shaved head and goggles.

Then I remember the Onyx, and I head over.

Handsome Max is at the bar pawing Xhenia, the lovely bar maid. He greets me and congratulates me on my victory in the park two days ago; somehow he heard about it? He asks me what happened. I tell him that a malenka sukka (little bitch) malchek (boy) clocked my friend Pavel, so I laid into him, and all his friends, like Mormon at a pizza party. Max told me the special word for coming to the aid of a friend, but I have forgotten it.

He orders vodka and milk. Yeah…just like in the movie.

I must admit that this is an unexpectedly refreshing combination.

Then the KGB arrives. Now they are called the FSB. Two guys: Andrei and Serge, off duty, and drunk, and they’re full of cash and looking for a good time, and they’re full of that certain feeling that comes with knowing that you’re untouchable. Andrei is a real charmer ace. He has a ghoulish scar running down that middle of his jug-head forehead, and his upper front teeth are black stalactites.

After a couple o’drinks, it’s midnight, and the sun is just beginning to dip behind the mountains. The four of us go next door to the little convenience store and buy vodka, tomato juice, pickled gherkins, sausage, and bread. This could mean only one thing…ROADTRIP!!!!  The dreaded KGB-style road trip. I feel as though anything could happen.

We jump into Andrei’s YAZ, pronounced ooo-Az. This is a Russian made jeep, with very interesting triangular doors. It retails for about 7000$, new. And off we go, out of town heading east, and into the mountains. I ask Max, who sitting next to me, and offering me a Baltika tallboy, “where the fuck are we going?” And Max says “To the Balls” and points his index finger into the air.

Magadan is surrounded by mountains on three sides. Directly south is the radioactive beach and the mouth of the harbor. On the ridge of the eastern mountain chain, there are three white balls, some kind of radar installations or observatories. Whom ever I ask tells me something different.

We come to the edge of the city, and get on a trassa (gravel road). Andrei is driving very fast. Then the trassa ends and Andrei warns me that things are about to get “extreme.” Now we’re in a dried up river bed, full of boulders the size of love seats, and Andrei is still driving as though this was a company car. It is impossible to describe the shaking I experienced that night. I was sure that the YAZ was going to shit the bed. I was willing to bet my return ticket on it. After the third time my head smashed against the headliner, I realized that holding on to the little handle above the back door, with white knuckles, was not enough. So with the hand that wasn’t holding the frothy Baltika, I reach down under the seat a feel around for something to hang-on to. Thank God I found a bar down there and clutched it for dear life. It was like riding a mechanical bull, while drinking.

Finally we reached the summit. And the view can only be described as science fiction.

Ok here we go: I’m standing on a mountain peak, the sky is clear, I’m facing west and the sun is day glow orange three degrees above the horizon. On my left is the mouth of the harbor and the Pacific. Below me is Magadan. But the tuman clouds have completely swallowed the city. These are weird terrestrial clouds that roll in from the ocean. But in the middle of the city, the tuman clouds form a huge vortex around the city arial TV antenna.  The low sun paints the vortex yellow and orange. Wow! Behind me is the other harbor, known  officially as Nuclear Beach, and off in the distance is the Horses peninsula. Oh, yeah… and I’m standing next to a three huge white domes.

The domes are abandoned. It looks as though they were never used. Inside the largest one, I entertained the others with my famous Chevy Chase Caddy Shack impersonation. The echo in the dome made it all the more amusing. I think Andrei wet his pants, just a little.

There is always something to do in Magadan.

[photo: fishing for salmon in the Sea of Okhotsk near Magadan. Totally unrelated to above story– sorry]