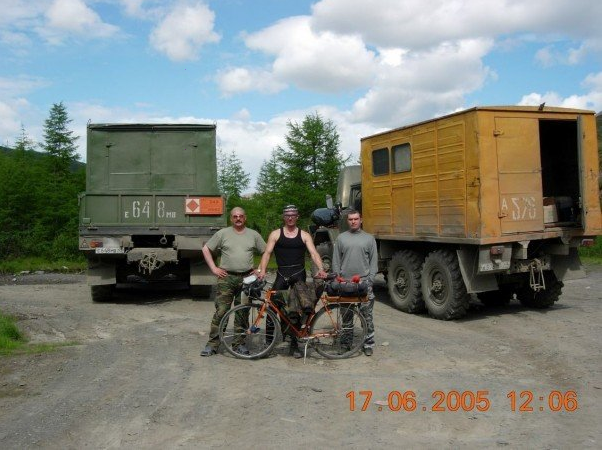 We pick up the action a week after the last installment: Andrej is biking through the Xanadu mountain range in the Central Siberian Plateau, gets cold and decides to hitch a ride.]


The nights on the south slopes of this mountain range are as cold as a witch’s teat. And so it came to pass that your humble narrator hitched a ride on a dynamite grooz-avik (truck). Yes, you heard right. It was a two grooz-avik convoy. The first grooz-avik was the mighty URAL and the second was the only slightly smaller ZIL. You can tell them apart because the URAL has a big polar bear hood ornament. They are both six wheel drive and the CV joint on these son’s of bitches is bigger than my head.

Allow me to introduce the cast of characters:
In the other grooz-avik (truck), the URAL:
The moment I jumped into the cabin with OO-Ra and Slava, OO-Ra busts out two small cucumbers, an apple and a plastic bottle of samagon (moonshine). Now I’d been warned, by many, many, people, about drinking samagon with the yahoos  of the Far East. But, I figured, I’m already drinking beer, vodka, not to mention smoking and playing with live ammo, in a dynamite truck, how much more danger could I possible bring upon myself by drinking a little samogon.

The Russians always ask me how old I am, when I tell them I’m 33, they all say the same thing: “you are like the Christ.” Apparently all Russians, including the Muslims, are acutely aware of the age of Jesus when he was Transfigured*. 33 is considered to be a man’s prime, and a lucky age.

Well I survived the jolly dynamite truck. At one point we were passing through an extremely fucked up little village. Between shots of vodka, Slava points out of the window and tells me that a few years ago a truck, just like this one,  accidentally detonated and annihilated this town. I looked out the window and, indeed, the town looked like Hiroshima. I began to laugh maniacally and I could not stop for a very long time. Why I laughed so hard I do not know. Maybe it was because I was happy to be alive, even though I knew that I was on the razor’s edge.

Next: The Gunmen of the Kolyma, Part Two

[*ed note: Czechs always make this comment about ‘Jesus age’ too, and they’re all atheists. Must be a pan-Slavic thing.]