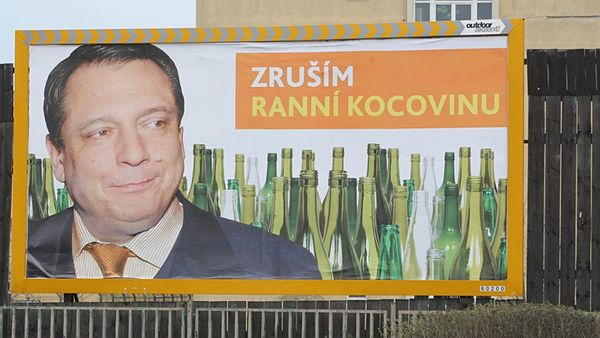 Friends in the U.S. often ask me if I follow Czech politics. My usual answer is that there’s not a lot to follow.

Lack of drama can be a good thing. After 45 years of communism, Czechs have basically decided they’ve had enough of run-amok ideology. As a result, there seems to be an implicit handshake agreement in place between every person in the country to keep hot-button cultural issues out of the political conversation. You’re not even allowed fly a Czech flag out of your window–– I’m telling you, the Czechs have had it with nationalism, fascism, socialism, whatever ‘-ism’ you like. I can’t even imagine a political debate in this country about, say, something like abortion rights– it’s simply impossible to picture.

Of course, lack of drama can also be a bad thing. It can indicate ‘everything sucks here politically and we’re so disillusioned that we can’t even drum up the necessary passion to get involved in a big heated political debate.’ Unfortunately, this is just as much the case as the pragmatism described above. I’ve literally never heard a single Czech person say a single positive thing about any active Czech politician. A bunch of assholes come together to make money– as my friend put it– seems to be the common consensus. In the U.S., we engage in a pet pessimism that our politicians are the all same, but deep down we know this not to be the case: you can say that George W. Bush and Al Gore are both assholes, but they’re clearly assholes in very different ways and have different belief systems and represent opposite ends of the Baby Boomer asshole axis. Maybe the ways in which they’re different don’t really matter as much as we’d like, but one can at least clearly differentiate between the two on a surface level. In the Czech case, the politicians really are all the same, and they’re not even assholes in a dynamic sense. For lack of a better analogy, they’re the guy driving the expensive car who nearly runs you over on a crosswalk and then angrily gestures at you to get out of his way. Assholes in a completely unoriginal, commonplace, banal sense. Assholes without affect.

A sign of how bad things are: Vaclav Klaus, the Czech president, is probably the world’s foremost global warming denier (now that Bush and that Australian jerk are no longer in office). Most Czechs I know despise his politics. And yet, they respect him to a degree compared to other Czech politicians simply because he comes across as reasonably ‘statesmanlike’– he’s intelligent, he knows how to handle himself and doesn’t overtly embarrass himself or the country. Compare these qualities to the rank amateurism of Mirek Topolanek, recently-ousted Prime Minister, who once flipped a rival politician the bird during a parliamentary debate and locked a respected journalist in an airport bathroom. Topolanek was the aspiring nobody who got up on stage and referred to Obama’s economic policy as ‘the road to hell’ in last year’s big summit and earned round rebuke from a rainbow coalition of world leaders. The ranks of decent politicians are so thin here that it’s a plus if you can simply carry yourself with a modicum of competence, never mind how bad your ideas might be.

Absent any inspiring ideological battles, and with all of its practitioners thoroughly dislikable (and corrupt, although that’s a subject for another post), politics in this country mostly revolves around allocation of social benefits and deciding how to pay for them. In the upcoming June election, one of the big issues is a medical co-pay scheme implemented by the ruling center-right party that requires you to pay 30 Czech crowns out-of-pocket to see a doctor. 30 crowns equals about $1.50. This is the raging fire of policy debate that is supposed to drive people to the polls: whether or not you should have to pay a buck fifty in addition to the (from a U.S. perspective) shockingly reasonable monthly fee that everyone pays to receive full health care. Hardly Lincoln vs. McClellan 1864. In fairness, there are larger and more systemic issues, to be sure (the aforementioned corruption, and a big deficit), but none of these seem to rile people like the 30 crown co-pay.

The pettiness that punctuates Czech politics is particularly evident in the massive billboard campaigns that you can’t escape for more than a minute if you’re driving on the highway here right now. The one at the top of this post is an attack ad aimed at Jiri Paroubek, leader of the left center Social Democrats (who, incidentally, is even more despised than other politicians among Czechs I know, in spite of the fact that most of these friends have left-leaning tendencies). The ad is meant to satirize Paroubek’s alleged practice of promising all things to all people without articulating a clear sense of how he’s going to pay for it (think ‘tax-and-spend liberal’). So, he’s shown in front of a row of empty bottles with the line ‘I will eliminate morning hangovers’. Here’s a detail from another baffling one that says (roughly), ‘I fight against clams, slugs and mollusks’: 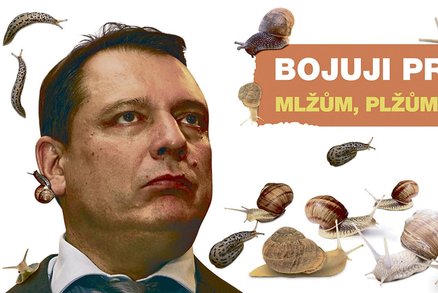 I guess the idea is to paint him as power-mad, vowing to defeat each and every commonplace thing that stands in his way. To me, it seems very much like a campaign that might have been composed by a media team of canny 12 year-olds. Politics in this part of the world have come a long way from iron curtain days…. but there’s still a long way to go, baby.