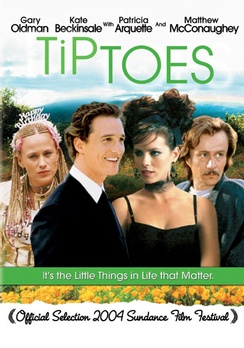 The other day somebody sent me a link to a trailer for what appeared to be a 2003 movie starring Matthew McConaughey, Kate Beckinsale, and Gary Oldman. Those actors were all pretty big-time in 2003, so I was a little surprised that I didn’t recognize it — it was called Tiptoes. But then I grasped its premise, and I immediately concluded that this was some Funny or Die sketch. In Tiptoes (purportedly), Kate Beckinsale is pregnant with her fiance McConaughey’s child, and he reveals to her that he is from a family of dwarfs and has been hiding this fact from her — and it is very likely that her child will be a dwarf. And the kicker, which proved to me beyond any doubt that this was all a big send-up, was that Oldman, in “the role of a lifetime” as the trailer promises, played McConaughey’s wise-cracking dwarf older brother.

The tagline, “It’s the Little Things in Life that Matter” and the improbable “2004 Sundance Film Festival Selection” also seemed to be examples of the perpetrators getting a little carried away with the joke.

It literally didn’t cross my mind that any studio could have actually made this film, let alone that these three actors might have voluntarily agreed to be in it. Even my movie producer friend agreed that it was just not possible. So I did some googling to learn more…and I found more and more evidence that it was real. An IMDB page. A Rotten Tomatoes page. Random internet discussions of it. I soon concluded that this was one of the most elaborate hoaxes ever perpetrated. Only when my friend actually managed to download a full copy of the movie and, he claims, watch all 90 minutes, did I accept that it was real (although I am still pondering whether the gag might have extended to filming an entire feature-length movie).

I’m hoping this can become a regular feature on the blog. Dan, I challenge you to find a movie less likely to be real, but still real.

Dan replies: If I wanted to be a jerk about it, I would nominate Abbas Kiarostami’s Close Up. Synopsis: In real life, a man named Hossain Sabzian insinuated himself into the lives of the movie-going Ahankhah family by pretending to be the noted Iranian film director Mohsen Makhmalbaf. Makhmalbaf’s colleague Kiarostami filmed the resulting criminal trial and then got Sabzian and the Ahankhah family to impersonate themselves and reenact the entire drama. Now that’s unlikely. It’s a jerk comparison, though, because Kiarostami’s movie is ‘unlikely’ in a deliberate artistic manner, whereas Tiptoes is just weird. What’s more, its a jerk move because Krafty introduced me to the film in the first place.

2 thoughts on “This Movie Happened”