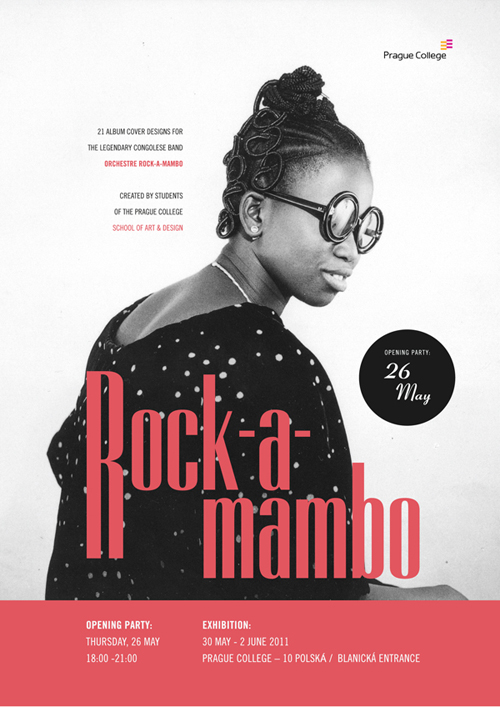 My latest time-consuming shenanigan has been to organize a show of student work for an exhibition called Rock-A-Mambo. The work comes out of an assignment called ‘Culture & Cliché’ that I gave to eight successive semesters of bewildered students for my Ideas Generation class. Basically, students are tasked with designing a CD cover (although I’m not sure that some of the younger ones even know what a ‘compact disc’ is these days) for 17 tracks of weird/rare/cool Congolese mambo, from this nearly-forgotten period of music history in the late 50s/early 60s when musicians in central Africa were super into Cuban dance rhythms.

The point of this musical selection isn’t to be willfully obscure. OK, maybe it’s partly that. But it’s also about the fact that the music is so out-of-left-field that students have to do tons of research to unpack the backstory behind the music. And, because it’s a strange urbanized hybrid of African and Latin forms, the usual trusty clichés of ‘barefoot village kid beating on congo drum as giraffe lopes by’ don’t cut it here.

As to expected, there are always a few students each semester who are always stymied by the nature of the assignment. But many more have produced fantastically varied, well-informed, creative responses to the assignment. So, I’m having a show with an opening party on Thursday. Good times.

I originally learned about the genre from our friend Alastair— check out the music below. Above is a poster I made for the exhibition, with an unauthorized assist from Malick Sidibé.