Spotted this ad for Music Club Zlatý Strom (Golden Tree) on the metro recently while heading to the train station and, subsequently, to Berlin: 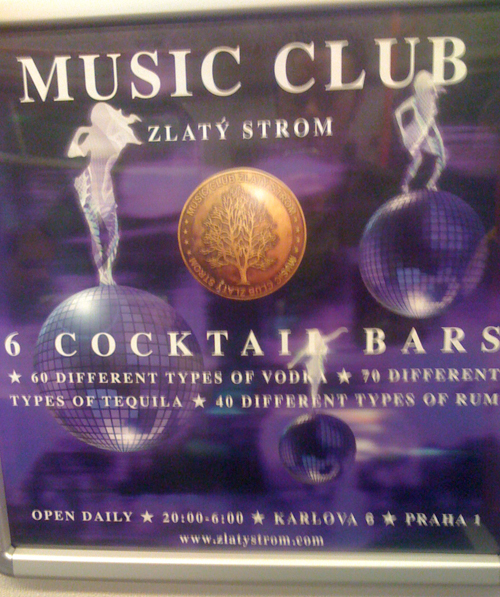 In this case, I have to say that the blurriness of the photo is only partly attributable to rush (it was a packed metro car, so I only had a moment of unmolested empty space between stops in which to snap it) and largely due to a spasm of self-conscious embarrassment I experienced while snapping it that some onlooker might think I was legitimately wowed by the looks of the place. What actually attracted me was the peculiar gigantism of the sales pitch (’60 different types of vodka! 70 different types of tequila! 40 different types of rum!), and the weird half-baked visual language of ‘cool, sexy times being had’: hazy, indistinct purple field, generic sexy woman silhouettes*, disco balls. Only the incongruity of the golden tree seal sets this apart from any number of other cheesy clubs, I would guess.

Indeed, as soon as I arrived in Berlin, I passed Club Matrix, which exhibits the same, lame purple-clad associations: 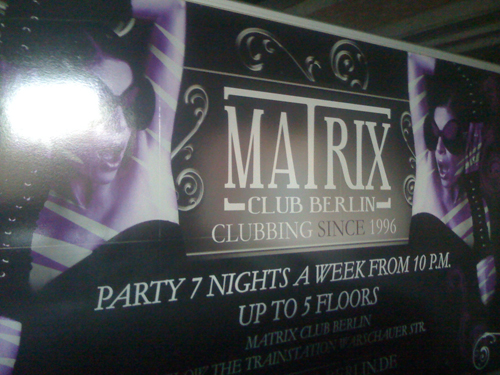 What is it with purple, anyway? I guess the thinking is that sheer black would be too dull, and red would look too hellish and infernal. There’s a sort of international visual esperanto of cheeseball Euro-disco-trashiness emerging here.

* Although it should be noted that this ad is incredibly chaste compared to the web site and online advertising for the Zlaty Strom, which I looked up as soon as I got back to Prague. All vague, atmospheric promises are tossed aside in favor of a much more graphic and concrete approach suggesting an outright brothel.