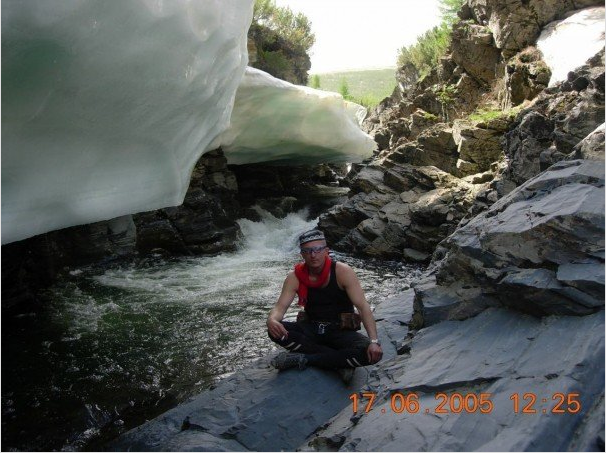 In the last installment, Andrej has been set up with a girl by the enigmatic Chechens Mohamed and Vaslan in the city of Susuman. In this- maybe my favorite- entry, he meets the girl Marina.]

The handsome Chechen, Vaslan, calls a girl named Marina and arranges a date. I speak to her on the phone and she demands that I speak English as proof that I am indeed an American. She giggles a lot. Vaslan describes her as a real beauty, and he makes the universal hour-glass motion with his hands.

I say goodbye to the Chechens and leave their den. I go back to my little dorm room and stare at the wall paper for 90 minutes and listen to my loud intestines doing their thing. (They are beginning to sound like the plumbing in an under-funded inter-city school in February.) Then I hop in a cab and tell the man “Coldtown” (Holod-nee).

This Coldtown can only be described as post-Apocolyptic. Imagine Mad Max meets Beruit circe 1987. There, in front of a building that looks like twice baked roadkill, there is a girl waiting. She is wearing a black satin dress; it’s basically lingerie. In the back it laces up, like a corset. Her shoes are black ankle boots with 4 inch steel heels. Her hair is dark brown with highlights. (It gets better:) In her right hand she is holding a large yellow daisy, and in the middle of her chest is a day-glow pink button, on which is written, in Russian “I wouldn’t recommend it!” She is beautiful beyond words. And she walks like a sea snake.

In the cab, she asks me how I know Vaslan. I tell her that I met him through Mohamed the Chechen. She looks puzzled. I ask her where she would like to go. She says “to Charm.” The cabbie knows the way.

When we arrive at the Cafe Charm, Mohamed the Chechen is waiting outside. They say hello and I shake hands with him. And I tell Marina that this is the guy I met on the plane from Moscow. But for some reason she calls him Adam. Apparently Mohamed-Adam fancies himself an Arctic James Bond, and enjoys using aliases.

Then Mohamed-Adam jumps in a very expensive Infiniti and drives off.

In the Cafe, Marina and I sit down to chat over beers. She tells me that her dream is to live in Morocco.

At that moment, the beer that had been in my mouth, quickly blasted out through my nose and onto the table between us. Morocco?!??!?!?!?!?!?!!?! Who the fuck wants to live in MORACCO?? * After I clean up the mess she goes on to tell me that she likes Moslem men because they are polite and don’t drink.

This, dear reader is the reason I am here. This type of girl is the kind that is ripe for the white slavery system. It takes me two beers to mentally prepare her diagnosis:

Her father is a drunk who doesn’t love her. He brought the family here from sunny Ukraine and then lost his job as the gold sands dried up, and then drank even more. Now she is attracted to men that don’t drink, but that still don’t love her; classic pattern. She was obviously in love with Vaslan, and he clearly didn’t feel the same way. He probably didn’t have the heart to dump her so he hoped that me and her would get together and he would have a good pretext for ending their little tryst.

I told her not to accept any job offers to go and work overseas. I told her about the things I had seen in my travels. I told her that the only way she was ever going to see Morocco was as part of an academic conference. I told her that she has no marketable skill that any other economy could possibly need, except shaking that ass.

[* ed note: I love the fact that ‘Morocco’ is spelled two different ways here– it seems like a product of the narrator’s astonishment.]

Next: A Rough Ride to the Balls