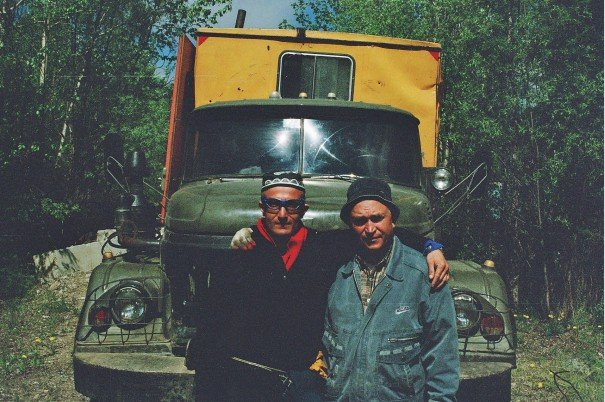 In the previous installment, Andrej hitched a ride with a collection of guys driving dynamite trucks through the Central Siberian Plateau.]

Subject: The Gunmen of the Kolyma, Part Two: The Friend In the Bucket
6/22/05

Not long after I joined the Mountainbusters, the ZIL shit the bed. We pulled over and made camp. I was passed out while the boys were building a fire and getting dinner ready. From the window of the ZIL cabin, I could see that they are busy preparing for the night to come. I wanted to contribute something, so I dig into my backpack and pull out a two foot long, whole, smoked Chinook salmon. The boys hadn’t hooked up the ladder one usually needs to exit the ZIL, so I had to climb down with the beaked head of the Chinook in my teeth. The boys were very amused and they cursed a lot.

That night we stood around the little fire and ate salmon, white bacon, little cucumbers, salted bread and apples, and drank Speznaz (Special Forces) brand vodka out of tin cups. The mosquitos were everywhere. As we chat, we are constantly slapping each other in the face, to kill the little lords of the taiga.

In the morning, I find Kol-Ya using a pair of scissors to cut a make-shift head gasket for Pet-Ya’s ZIL. This did not work. We spent the entire day there, as the intrepid, pious, and foul-mouthed Pet-Ya toiled in the six-foot high engine of the ZIL, completely covered in mosquitos. I declared to all there that Pet-Ya was my hero, for working so long and so hard, all day. They told me there is no alternative. There is no such thing as a tow service out here. Either we fix it or we walk with the mosquitos.

During this down time, I explored the surrounding area. Below us, about one hundred feet down, runs the little Cascade river. It’s about six feet wide and three feet deep and it cut through a very steep and narrow canyon. On the walls of this canyon are ice formations, like shelf fungus, twelve feet long and ten feet thick, just hanging out over the little river, extending from both sides, alternating. The ice is white with blue stripes and it drips sweet cold water. Me and the Na-Chelnik, Roos-Lan Nickoliaevich, went down to gather water for the camp. He took some pretty sweet pictures of yours truly, but the next time he’ll have accesss to a PC will be in September. He took an especially nifty picture of me with WolfSnoutChopper that I hope to have published in Blade magazine.

The Na-Chelnik, Roos-Lan Nickolievich, asked if he could take my bike, the Riddle of Steel for a little ride. We pulled it off of the TNT  truck and away he went, awkwardly: I think the seat was a little too high for him. I told him he looked like Butch Cassidy with the Sundance Kid’s moustache.

After a lot of vodka and a lot of cursing, somehow, with the grace of God, after 12 hours, we were under way.

OK. I’m about to relate to you, dear readers, the hardest part of my journey, so far. At one point, the Na-Chelnik, Roos-Lan Nickoliaevich, asks me if I want to sit up front with him and Pet-Ya. I couldn’t refuse. Besides, they had a better view. I’m sitting between PET-Ya and the Na-Chelnik, and PET-YA is as mad as a wet bobcat because his machine is all fucked up. And he is cursing up a storm. Here’s a little sample:

And your humble narrator had to sit through about 30 minutes of this without laughing. It seemed inappropriate to laugh in this situation. I almost wet my biking britches, no lie! Thank god the ZIL broke down again, and I could crawl back to the rear, with the hyper explosive gear and laugh with impunity.

After many mechanical trials and tribulations, we get to a little pas-EE-o-lock (wee village) where my hero PET-Ya has a crash pad. There we ate mashed potatos and hot dogs and salted bread. The vodka, this time, was drunk out of china tea cups. Quickly, the Na-Chelnik, Roos-Lan Nicoliaevich, got sloppy and spilled his cup so it was time to put him to bed. PET-Ya quickly followed. That left me and the seven foot tall OO-Ra at the table with half a bottle of vodka, and plenty of hot dogs.

OO-Ra told me about his experiences in the Chechen War. He described how Russian tanks, under fire, sometimes drive over thier own dead, to prevent the Chechens from mutilating their bodies, in the most unspeakable ways. He told about how he pulled a friend of his from a burning armored personnel carrier, only to have that same friend get cut to pieces by machine gun fire, just two days later. He described collecting the remains of his friend and putting him in a bucket. I asked him his friend’s name. He looked at me and his eyes squinted, his face contorted, and in a high pitched voice, he said Nikolai, and began to weep. He then told about standing over a hole in the ground, Nikolai’s grave, as the bucket was being lowered into the cold cold ground, across from OO-Ra was standing Nikolai’s mother, staring at OO-Ra. OO-Ra, then and there, prayed that I would never have to live through having to look into the eyes of my best friend’s grieving mother. Her eyes were saying “Why didn’t you save my son, it should be you in that hole.” I shed a manly tear, or two for Niky, and we drained a couple of more cups in his honor.

Then, somehow, after the tears, the topic of conversation turned to single combat. OO-Ra could see that I was built like a brick shithouse, and so he asks me, “you think you can take me?” I tell him that I could brake him like a twig, and I made the international twig-breaking gesture. He immediately challenges me to a brawl, either here in the little apartment, or outside on the sooty grass. I declined, telling him that I knew that it would get ugly. I can’t imagine either one of us surrendering until a major bone was broken or severe lacerations require a trip to the doctor, if there was one out here. But OO-Ra was persistent. He nagged me for what seemed like an eternity. Finally I agreed. How can your hunble narrator refuse a little of his favorite passtime, what I like to call La Violencia.

So we both began to remove our gear, so as not to cut each other. Then I go to remove the little silver icon of St.Seraphim, that my good buddy Boris gave me in Moscow, from my neck, and it suddenly dawned on me what the fuck I was about to engage in: a drunken vodka induced brawl with a great friend…that is seven feet tall, and an experienced killer. Thank you St. Seraphim for saving one of us from some possibly serious harm.

Parting with the Gunmen of the Kolyma was very very hard. We exchanged bear hugs and I had to quickly turn and walk away, to hide my sorrow. They haven’t heard the last of me….

Next: In the Den of the Chechens, Part One