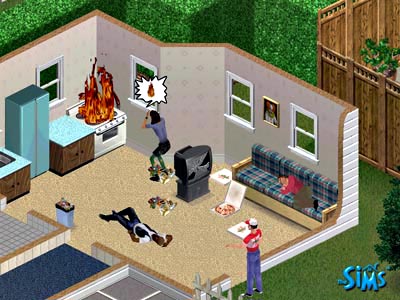 After I blogged about Chuck Klosterman’s Eating the Dinosaur a few months ago, a reader named Katie suggested I read his first book of essays and sweetened the deal by mentioning that it includes an essay on the Sims, the virtual reality game that seemingly enslaved the entire female Midwest a few years back. So, during my SF trip, I read a friend’s copy of Sex, Drugs and Cocoa Puffs and was riveted by the whole thing, especially the Sims essay, Billy Sim:

I am not a benevolent god.

I am watching myself write in a puddle of my own urine, and I offer no response. I have not slept or eaten for days. My cries go unrecognized and my loneliness is ignored. I am watching myself endure a torture worse than death, yet I decline every opportunity to end this self-imposed nightmare. Darkness… imprisoning me… all that I see, absolute horror. I cannot live, I cannot die, trapped in myself; my body is my holding cell.

I am the master and I am the puppet. And I am not the type of person who still plays video games.

So go the opening paragraphs of the essay, foreshadowing Klosterman’s eventual boredom with the game and subsequent decision to neglect his SimSelf while the latter writhes in his own pee.

The first thing I can immediately tell from this passage is that Klosterman and I are about the same age (he was born a year before me, in 1972). The tell is the phrase ‘video games’, which only men currently between the ages of about 33 and 39 use. Younger people call them ‘computer games’ or just ‘games’. Older people can’t refer to them coherently at all. The women I know don’t mention them unless its in the context of the final flaw that persuaded them not to date some guy they were perviously thinking about dabbling in (e.g. On top of it all, he sits at home and plays video games). We late-Gen-X males are the only people who became fully accustomed to the idea of manipulating a character on a screen before the advent of the personal computer age.

Next, I also immediately identify with the co-mingled curiosity and contempt that Klosterman expresses towards gaming (‘It’s fun, but– somehow– vaguely pathetic’). For my part, the contempt partly serves to mask a fearful respect that I have for the gaming industry and its potential to enslave me. I have only played one game in my adult life (Civilization), but that’s less out of lack of interest and more out of a wary realization that I love games in general and can easily picture myself getting sucked in if I strayed past a certain threshold. This dread manifested itself in a particular anti-social habit that I developed towards a guy I used to share an apartment with, who worked at Electronic Arts as a producer for the Sims. The roommate had an Xbox lying around that he would bring out (albeit only quite rarely) to show his friends what he was doing at work. After they would invariably disappear and leave the console lying on the floor in front of the TV, I would always respectfully pick it up and place it on top of the tallest bookshelf in the living room– the most inaccessible shared spot in the house. Such was my determination not to become an addict. 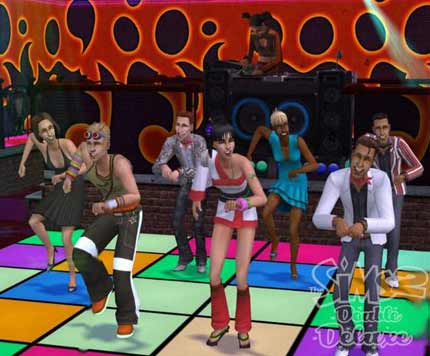 Klosterman writes at great– and persuasive– length about the bizarre and abstracted aspects of the game, but one personal experience I had involving the above-mentioned Sims-producer roommate really drove home for me how weird the whole thing is. One Saturday, my roommate spent the whole day at his office furiously working to correct a mistake one of his programmers had made. The programmer was supposed to have designd a disco ball for a dance club environment. Instead of creating the disco ball from scratch, the programmer had taken a lawn sprinkler and decided to modify it (this apparently being a common approach, according to my roommate). But, the programmer had done a really lazy job of it, so the ‘disco ball’ was still acting more like a lawn sprinkler and spraying dancers with water. My roommate stomped home at about 7pm having lost an entire sunny Saturday to getting the disco ball to act like a disco ball. He was so deeply immersed in the problem and so enraged about it that he managed to relate the entire scenario back to me without expressing the slightest awareness of what an absurdly meta way this was to spend one’s Saturday. If I wasn’t thoroughly creeped out frightened by virtual-reality game play until now, this lawn-sprinkler/disco-ball anecdote totally scared me straight as shit.

Authorial self-doubt and torment note: I previously promised myself that I would boycott the ‘#FAIL’ construction in this blog, as I think it’s the lamest, most overused, mind-rotting meme currently in circulation. But, I couldn’t think of a single other title for this post that works nearly as well. So, there you have it.