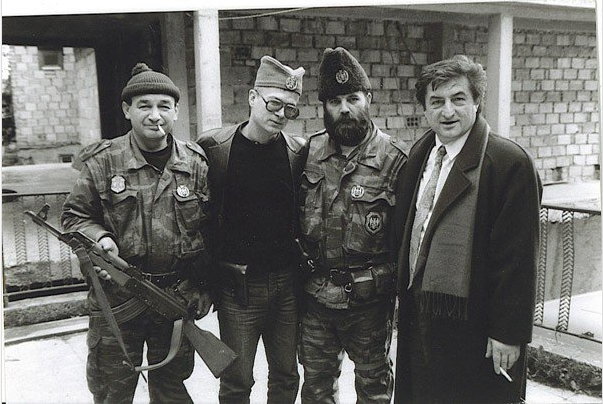 [ed note: the following is an excerpt from the travel journal of my old high school friend Andrej Mucic. In 2005, Andrej bicycled over 7,000 miles through Siberia to raise money for the American Anti-Slavery Group, a nonprofit that fights international sex trafficking. Read more about Andrej’s mission, or watch this Russian TV news clip about it.

We pick up the story on the fifth day of the journal: Andrej is in Moscow, preparing for his journey and searching for the Limonists, a group of anti-government radcals named for dissident writer Eduard Limonov (shown above, second from left, with assorted comrades)]

Yesterday in Red Square I found a guy selling Limonka, the newspaper of the Limonovists. On the back I found their address. It seems they moved the Bunker over to the University of Moscow area. Finding it was a bitch. The entrance is an unmaked massive steel door in the basement of an apartment building. That door leads to a short tunnel and another massive steel door with a viewing slot. They asked me “what do you want here?” I told them I was here to see Eddy. They let me in and checked my credentials and everything was cool. That’s cuz I had my Serbian passport with me. At the threshold of the Bunker there is a flag they use to wipe their feet. It’s a red flag with a white St. Andrew’s cross. “This is the flag of our enemies” Grigori says to me. The Limonovist are engaged in a street war with a group of government thugs known as the NASHI and that was their flag.

Three months ago I sent an email to a guy named Alexei. I found his email on the Nationalist Bolshevik Party website. The Limonovist’s offical name is the Nationalist Bolshevik Party. In the email, I told him what I was doing and he briefly replied “we are waiting for you in Russia you fag.” He was very suprised to see me, he thought I was fucking with him. To make a long story short, I met a bunch of these fine young patriots and we took a group photo, but my flash failed to go off so I’ll have to get another when I return. Alexei promised me a big party in The Bunker if I live through this journey. Alexei also warned me not drink home made Russian booze known as samagon. Later me Alexei and the beautiful Natasha went to the magestic local park in front of the Mega-University and had a beer and talked about our common hatred of policemen. It was a nice day.

Now I’m off to Sunny Magadan. I missed my last plane on account of the fucking traffic here. This time I’m going to leave for the airport seven hours early, so I can beat the dacha traffic.

Next: The Jaws of Hell