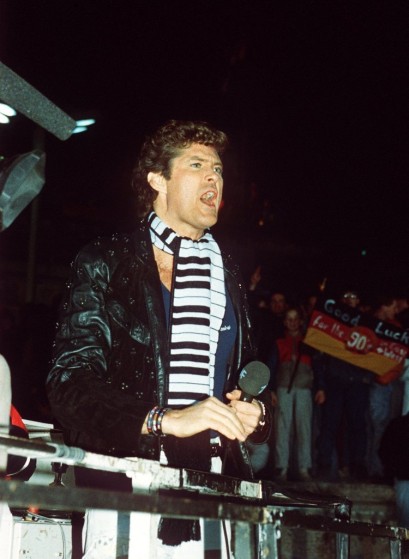 Lately, the wife and I have been batting around the idea of spending a couple of summer months next year in Berlin, just to try it on for size. I’ve written several times in this space about my positive feelings for Berlin, so it’s not like this is a new sentiment on my part. But it does seem to consistently amaze many Germans to find that their capital city has become such a desirable destination. I’m still discussing with my German friend Patrick the idea of co-authoring a coffee table book that will explore this phenomenon under the title Germany: Finally Cool After All These Years*.

Really, the only thing that gives me pause about the whole experiment would be subjecting myself and my small child to the infamously deficient German sense of humor. The English and – particularly – Irish sense of humor seem to exist as a pointy weapon to be used against ones’ social superiors, a manner of leveling the playing field. The Jewish humor tradition that dominated American culture until the 1970s probably serves the purpose of that Freud imagined for humor: allowing us laugh at those things that are not, in fact, funny. Meanwhile, the German sense of humor, from my observation, seems to be a humor of consensus and agreement– ‘we all agree this is funny and will now laugh together.’ Which is not, in fact, very funny.

Digression: I developed my own theory about the origins and/or social function of humor from watching my infant son develop. You know how small babies spend hours upon hours waving their arms and legs around as a instinctual means of building up the muscle strength to later be able to walk? I think humor provides the same role in a social sense: it gives tiny children a means of interacting socially with their parents before they have the ability to speak or formulate many opinions or ideas. Crying is obviously the first learned social behavior– infants do this from this moment they’re born. But laughing and smiling come shortly thereafter, before a child can do much of anything else.

Here are two interactions I had with Germans that defined my impression of the national brand of humor:

1. At a hostel in Dresden, I provided the receptionist with my credit card which, having been issued by Wells Fargo, bears the romantic image of  stagecoach. ‘Oh, this is nice,’ she remarked. ‘Thanks… you can keep it,’ I replied with a facetious lilt, signaling that I was not in fact being serious. ‘YES… AND YOU GIVE ME THE CODE NUMBER… HA HA HA,’ she answered, looking up at me with the intent we-are-now-making-a-joke expression. This seems to me to be the main deficiency in the German humor gene: a desire to take all nuance and uncertainty out of the equation. HA HA HA indeed.

2. Wearing sunglasses, walking along a street in Berlin on a technically overcast but actually very bright and hazy day. A large, florid, long-haired guy passes me with a group of his friends and says mirthfully (in German): ‘Why are you wearing sunglasses when its cloudy outside?’, to an immediate volley of ho-ho-hos from his entourage. I didn’t understand this as it was being said, so I was powerless to respond… once my wife explained what had happened, I whirled around in disbelief to find my antagonists, but they had disappeared into crowded Warschauer Strasse. In any case, I would submit this a classic example of humor-to-establish-consensus-and-social-norm, with the normies ganging up on the apparent outsider.

(Photo: David Hasselhoff single-handedly ruins one of history’s great moments with his performance atop the remains of the newly-fallen Berlin Wall in 1989.)

2 thoughts on “How We Laughed”