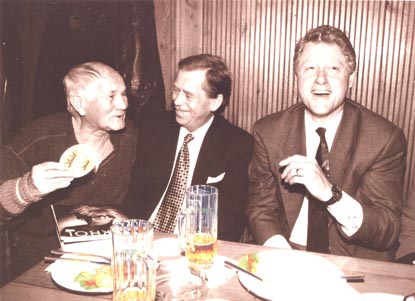 Last night, I went for beers with colleagues from my first, bad job in Prague (an agency that spat out an endless supply of banner ads and sitelets for Vodafone– my co-workers were really nice, but the work was shallow and boring). When I started this first job, I was naturally curious about the drinking habits of my Slavic colleagues, and especially about a certain workplace convention– previously unknown to me– called ‘shots in the office’. Back in the US, I worked at a few places that contrivedly attempted to let their hair down on Fridays and have would beers in the office as the weekend approached, but hard liquor was another story altogether. At this first Czech job, in contrast, I’d be intently hunched over my computer attempting to meet an end-of-day deadline for some inane Vodafone thing when I’d feel a discreet tap on my shoulder, turn around and see Jirka or Lenka or Pavel making the international ‘let’s have a shot’ motion. A bunch of us would scurry into the conference room, where somebody would produce a bottle of slivovice (plum schnapps). Everyone would toast and down a small shot, then busily run back to their battle stations to resume working. Lest this sound too primitive and iron-curtain-ish, I should add that these co-workers were distinctly up-and-coming-professional types– hardly anyone in the office smoked cigarettes, and the general office atmosphere was very trendy and hip in manner of ad agencies everywhere.

Last night, we met at a bar called U Zlatého Tygru (‘At the Golden Tiger’) that’s one of the most representative classic old fashioned Czech bars. The moment I walked in, I thought, “I wonder if this is the bar that Václav Havel famously took Bill Clinton to?”. Soon enough, I was informed that it in fact was the very bar. I would tell you more about the place, but it was hard to see with water gushing out of my eyes from the 50 cartons of cigarette smoke floating around in the air. Rest assured that I was having as good a time as Bill is enjoying in the photo above. I wonder who the guy on the left is– trusted Havel advisor, or random barfly? I wonder what kind of Czech bar food they ate (probably something hideous, given the year). I wonder if Bill remembered to order some wiener schnitzel to go for Monica (heh heh).

Anyway, as I’ve mentioned before here and here, Czechs sure do love their old fashioned bars. There are few places where anyone feels inclined to try to look or act cool– generally, a kind of relaxed slobbery prevails. As evidence, I present this handsome specimen whom I photographed a few years ago at the spot around the corner from my current job (on a Friday evening, no less– one can only assume that this was his special ‘going out’ outfit): 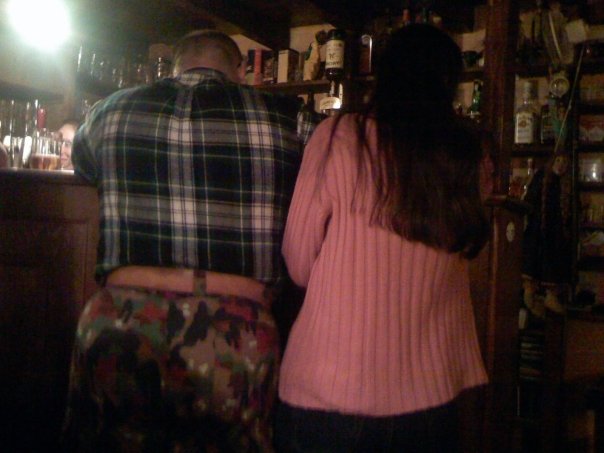 5 thoughts on “Drinking with Czechs”