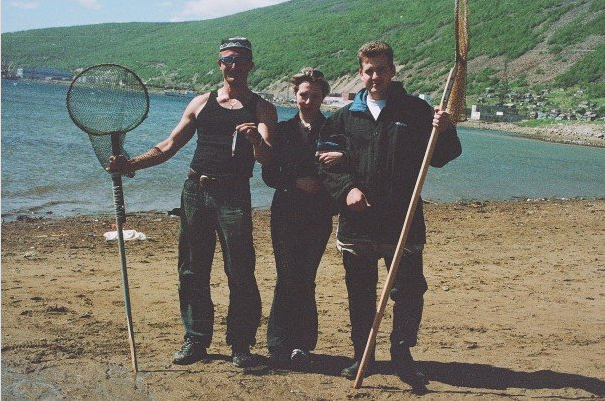 Here, Andrej has flown from Moscow to Magadan (map), gateway to the Kolmya region and a former transit station for prisoners on their way to labor camps during Stalinist times.]

I’ve just arrived in the Jaws of Hell. I’m writing to you from the Laboratory of Extreme Physiology at the Scientific Institute of the North. I was met at the airport by two lovely girls. Julia who works for the local Ministry of Sports and is working on her Master’s in powerlifting and Lena who is a PhD candidate doing her thesis on Arctic aging. Cool beans.

I’m staying the Hotel Ocean and it’s pretty sweet and only 27$ a night.

I’m  gonna feel out the weather and then break north.

Give to the AASG you maggots!!!!

I visited the Magadan Geological Museum.  I saw some amazing things. Here’s a brief list:

I saw a stuffed wolf that looked EXACTLY like the wolf in American Werewolf in London, the last scene when he’s tearing apart Piccadilly Circus.

Yesterday I bought six huge Kamchatcan King Crabs and me and my new friends glutted ourselves to excess on borsht and sweet crab meat and beer. They tell me that there is a species of HAIRY crab here. I’ve looking for it at the fish mongers but I can’t find it. Apparently they are immediately shipped to Japan where they command a high price.

After I was on TV,  I was contacted by the local Society of Disabled People. Here they are called invalids. They are planning to ride tandem bikes along my route next year and they asked me if I would be their scout. They gave me classified ultra-detailed government maps and they would like me to describe the road conditions from Magadan to Moscow. Of course I agreed. They hope to raise awareness of their plight here in the Far East and petition the central government in Moscow for more assistance. Imagine a group of blind people biking across Siberia! Now I am their eyes, in sense. They gave me letters of introduction I can use to get help from invalid groups across Russia as well as veterans groups.

The local head of the ruling United Russia party also gave me letters of introduction I can use when cops hassle me. He also forced me to accept a shit load of campaign trinkets. I didn’t tell him that I hate his party.

Now I have the whole political spectrum covered. I am friends with the Limonovists and their enemies the United Russia Party. I think if the local party boss knew about my association with the Limonovist he would not have been so friendly.

At the Regional Museum I got a taste of the GULAG system. I got to see all kinds of fantastic documents and physical objects from the regional slave camps. 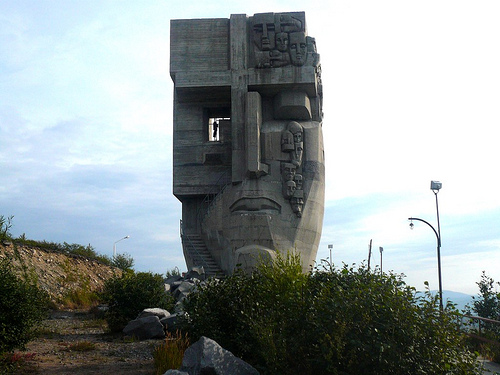 I topped all that off with a visit to the Mask of Sorrow, a huge monument to the men and women that perished here under the regime of DALSTROY, the state enterprise that ran the slave camps here from roughly 1931 to 1951. It’s on top of a mountain and the weather was appropriately eerie and foggy. At the rear of the monument there is a statue of a woman kneeling covering her face and crying. I offered libations to all the dead homies by sprinkling her with sunflower seeds and beer. I was very sad.

When I tell the people here about my work on behalf of the AASG they seem to have trouble believing me. The only way to get people to believe you, it seems to me, is to do something really grand and stupid, as a demonstration of personal conviction. The Russians understand this philosophy well.